Cat5e Vs Cat6 Vs Cat7 Vs Cat8 – Which One Should You Choose?

Ethernet is one of the most popular internet technology standards. An Ethernet cable is an integral part of a LAN network. This is a cable that links devices within a network. There are different types of Ethernet cables, each with limitations with respect to the distance and speed they can carry signals effectively.

Here is a look at the differences between CAT5e, CAT6, CAT7 and CAT8 Ethernet cables.

CAT5e is an improvement of the CAT5 standard. The word ‘e’ represents enhanced. While both CAT5 and CAT5e cables can transmit data through a series of networks and counter radiation influx, CAT5e has advancements that result in a better communication process. CAT5e can handle situations like crosstalk and EMI better than the CAT5 standard.

CAT5e are twisted pair cables that come with a maximum frequency of 100MHz. CAT5e cables are used for telephony and video signal transmission.

CAT5e cable can transmit 100 Mbps Ethernet at a distance of 100 meters. It is the least expensive modern Category cable, but as Cat6 cable continues to decrease in price, the cost savings for Cat5e may not be worth the slower speeds.

CAT6 is the sixth generation of Ethernet cabling used in business and home networks and the current “typical” cabling standard used in modern office buildings. CAT6 is backward compatible with CAT5e and CAT5 standards that came before it. These cables support Ethernet data rates of up to 1 gigabit per second. CAT6 cables can also accommodate 10 Gigabit Ethernet connections for a limited distance of about 55 meters.

CAT6 supports a frequency of 250MHz. The main difference between CAT6 and CAT5e is transmission performance. CAT6 has an thicker gauge and tighter twist, which reduces interference. It also has a more improved return loss and insertion loss and equal level far-end crosstalk than CAT5e. This means it has a higher signal-to-noise ratio when compared to CAT5e.

You may have heard of Category 7 cabling and assumed it is the latest and greatest, faster version of Cat5e or Cat6 cabling. However, Category 7 is not an actual IEEE cabling standard, but a proprietary design that does not have an official blessing from the networking industry. It does not use RJ45 connectors, but a proprietary connector. Without official IEEE or EIA standardization, any “Category 7” cabling you purchase will be different from manufacturer to manufacturer.

If you’re looking for a faster copper alternative to Cat6A, then Category 8 is your answer.

Category 8 is the official successor to Cat6A cabling. It is officially recognized by the IEEE and EIA and parts and pieces are standardized across manufacturers. The primary benefit of Cat8 cabling is faster throughput over short distances: 40 Gbps up to 78’ and 25 Gbps up to 100’. From 100’ to 328’, Cat8 provides the same 10Gbps throughput as Cat6A cabling.

Due to these distance limitations, the best use case for Cat8 would be inside a data center to connect network equipment to each other. It would not be cost-effective to use Cat8 for an office build out as the distance would quickly decrease the speed throughput to that of Cat6A, which is cheaper to procure and install for the same performance.

There is a lot that goes into choosing an Ethernet cable. The main factors you need to consider include function, speed, distance, and environment. CAT5e, CAT6, and CAT8 cables have differences that make them suited for different circumstances.

The first thing you need to think about when choosing an Ethernet cable is its function. Think about the type of device that will run on the cable. For example, a wireless access point will have many devices sharing one or two cables. Cat6A would provide a larger “pipe” and faster speeds than Cat6 or Cat5e. For a connection to a user’s workstation (computer and phone), Cat6 cables would suffice since each device has a dedicated cable for it.

Speed is another critical feature of Ethernet cables. You should have cabling that is equivalent to what will be running on it. For example, if you have data equipment that supports speeds of more than a gigabit, you will not get the most out of the network by using CAT5e cabling. It would be more efficient to use CAT6 and CAT6A cabling. You should also think about how you will be using the internet. Streaming movies, video conferencing, and high-volume downloads require a high-speed internet connection.

The environment where you will be using the cables is one of the most crucial aspects that should affect your choice. For indoor use, plenum cabling is required by most property management companies. Plenum cabling is “low smoke” and will not emit harmful chemicals in case of a fire. For outdoor use, direct burial or outside plant (OSP) cabling will be needed for water and weather resistance. Cat5e and Cat6 are manufactured in outdoor rated OSP types.

A related study was conducted to determine the signals transmitted at different temperatures. The results showed that there were higher levels of CRC errors at higher temperatures for Category 5e cabling compared to Category 6. 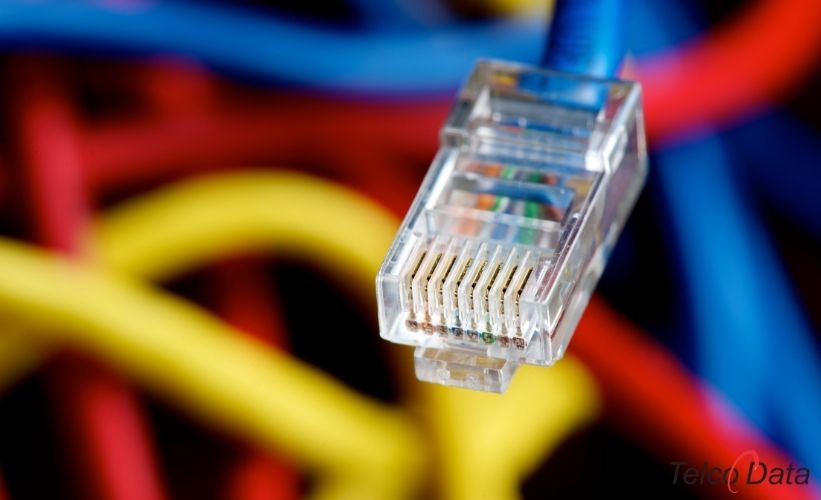 Learn More About the Appropriate Network Cables from Telco Data

When choosing Ethernet cabling for your office, you will need to consider what the internet will be used for, the office environment, and the most appropriate speeds. For example, suppose you will be conducting video conferences, streaming videos, and downloading files on a regular basis. In that case, you will need a cabling standard that supports high speeds and has good protection against crosstalk and EMI.

Generally, Cat6 is the standard for office use. It is also the appropriate cabling for startups. CAT6A is recommended for higher performance and 10 Gigabit Ethernet over the full distance distance. CAT8 supports 45 Gigabit Ethernet but it’s short range for those speeds makes it best suited for connections inside of one room. Cat5e is the most economical choice and is great for non-bandwidth options likes fax lines or plain old telephone lines (POTS) or other utilitarian purposes. But with the decreasing cost of Cat6 cabling, there is little benefit to installing an older standard in your new office.

Therefore, CAT6 and Cat6A are ideal for businesses of all sizes, while CAT8 is best suited for data centers. At Telco Data, we will be happy to help you get the most appropriate cable standard for your business. Contact us today by calling 512-977-0505 or email us at info@telco-data.com.

Are There Any Cabling Standards Apart from CAT5e, CAT6, and CAT8?

CAT5 superseded the CAT3 and 4 versions and became the common standard in the early 2000s. It comes with a speed of 100 Mbps. However, it is now obsolete, and new networks will either have Category 5e, 6, 6a, or 8 cabling.

What is Cross Talk?

An excellent example of crosstalk is when using a landline phone. Since landline phones have twisted-pair wiring, when a neighboring phone’s twisted-pair wiring interrupts your signal, the resulting interference is called crosstalk. The unwanted signal interrupts the message being passed by another circuit. A technician can check cables with a tester to determine whether crosstalk is going to be a problem.

Some electrical equipment emits interference. This is what you experience when listening to the radio or watching television. The interference is called electromagnetic interference or EMI. This is a form of radio wave that is similar to those emitted by broadcasting antennas.

In some cases, the interference is temporary, but in other cases, it is a nuisance. Examples of emitters of EMI include thermostats switching on and off, mobile phones, and microwave ovens. Ethernet cabling has a protective sheath that reduces EMI.

What is Gigabit Ethernet?

If you have any questions, please contact our Ethernet Cabling Experts today.